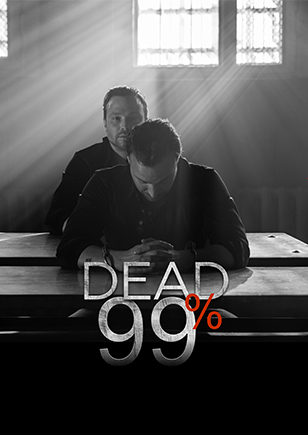 A great catchy story about identity theft and a clever fight for its return. The tension is palpable, the action is and it is easily applied to any country. The series was super popular online with younger audience.

The cushy architect Artyom Artov’s life drastically changes when Artov arrives in Berlin for negotiations with investors. On the same evening, an Albanian arms dealer is murdered in one of Berlin restaurants. Witnesses see the murderer’s face, and he looks exactly like Artov. The next day someone robs a Kosovo Mafiosi, Arben Tashi, stealing a million euros. According to Arben, the robbery was committed by Snake, a criminal wanted by Interpol, who looks exactly like Artov. Now the Interpol, gangsters and the FSB are hunting for the architect. He lost everything and is already 99% dead. But 1% of hope still remains, and Artov gathers his strength to fight for his life and clear his name. Yet, till the last minute, we can’t be sure who is (literally) calling the shots — the evil twin or the good guy?…