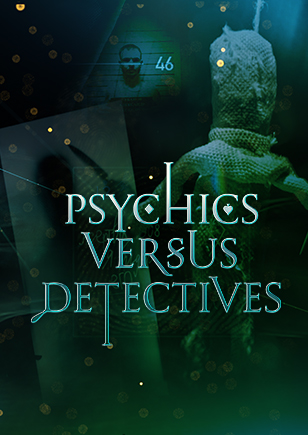 «Psychics vs detectives» is a battle between mystical and logical. For the first time professional crime fighters — investigators, operatives, forensics will compete in solving real crimes with psychics, shamans, and witches. Viewers can see and decide for themselves which team — crime fighters or psychics — is more reliable. What really works — intuition or deduction?
Members of two teams receive a task — to solve a crime in 12 hours. Both teams get a case file and physical evidence. After the time is out, teams have to describe the alleged criminal and provide as many details about the case as possible.
For every case, teams choose their leader. Leader manages the team, assigns tasks and reveals the team’s conclusions.
The winner is decided by a Secret Witness who may be the actual witness, the victim himself or the victim’s relative. He or she knows everything about the case in question.
If the team loses the battle it has to choose one member to cut. In the final episode, the losing team stays with only one member. The winner of the grand finale gets the main prize of 5 million rubles. The winner could choose how to dispose of money he gets — he can take everything or share it with members of his team, or even with his opponents.